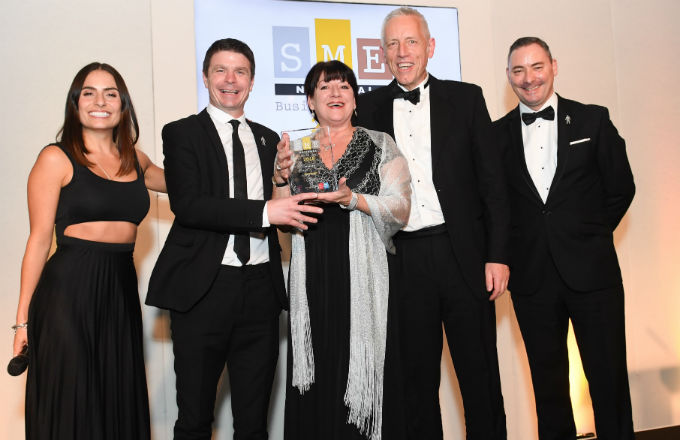 The audience was told that judges had commended Neptunus for “a simply outstanding entry from an excellent business that clearly demonstrates their professionalism and innovation.”

Neptunus, whose UK headquarters are located in Northamptonshire, had also been short-listed in a second category for the Best Business Employing Less Than 50 People.

Managing Director April Trasler received the prestigious award at a ceremony at Wembley Stadiumon Friday night attended by over 500 guests. She was joined on stage by Head of Operations, Tim Hall, and Project Manager, Richard Treml.

Trasler says:  “Over recent years we have won a number of industry specific awards and recognition as the country’s Best Temporary Structure Supplier, but we are particularly delighted to win this SME National Business Award.  We were in competition with numerous SME businesses from across the UK and from a wide variety of different sectors. It was a tough category with 14 companies on the short-list, so being recognised for our enterprise and innovation against such fierce competition is especially pleasing.

“Ultimately, awards such as this are important recognition of the sterling efforts of every one of our employees at Neptunus who all contribute to the success of our business.”