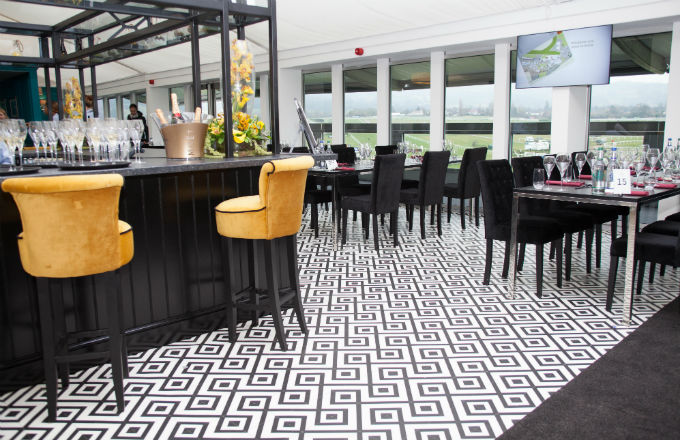 Extending the strong ongoing relation between The Jockey Club, Cheltenham Racecourse, The Festival and Arena Group, the company once again was the exclusive provider of course-side hospitality.  The world’s longest 180m long triple decker accommodated over 25,000 hospitality guests across the four festival days in a variety of luxurious settings that gave customers choice of environments and budgets.

Arena Structures project manager Ben Sly oversaw the construction and interior fit-out of the suites, restaurants and hospitality boxes and all the support services within the triple decker, as well as the adjacent Guinness Village structures, which gave another 75m of viewing onto the home straight.

Arena’s Ben Sly coordinated teams and resources from five sister companies to deliver Cheltenham Festival, which saved the Jockey Club both time and money. Arena Scaffolding was first on site installing the substructures for all of the temporary facilities. Arena Structures then constructed over 11,000sqm of temporary facilities. Arena Seating installed clearview grandstand under the Arcus roof of the Guinness Village. Arena Interiors designed and installed a wide range of styles of interiors, including suggesting the new look ‘Theatre’ suite, which was a sold out success. Spaceworks and Well Dressed Tables supplied half a million items in six artic lorry loads of furniture and tableware, from contemporary to classic to outdoor ranges from their in-house inventory, making for a real turnkey service that is unrivalled within the UK events marketplace.

Graham Muir, Arena UK &Europe CEO states: “Cheltenham Festival is the first major temporary sports event installation in Arena’s calendar and is seen by many as a barometer of standards for the year to come.  Hospitality is key in the Festival culture when it comes to the experiences offered to VIP guests and is integral to the event’s economic success for The Jockey Club.

“Once again we have worked to innovate and introduce new concepts within our facilities. From the new Theatre Suite with its hard walls and very different feeling to other restaurants such as Silks or the Long Run, through to the ranges of Spaceworks furniture. Not only this but Ben Sly and his team have risen to the challenges of this build – including the snow storm that hit hard just two weeks before the Festival! Their ability to communicate contingency plans with the client and their hard work and flexibility saw the facilities all ready on time. In all ways, we’ve raised the bar once again and received very positive feedback, which bodes well for the year ahead.”