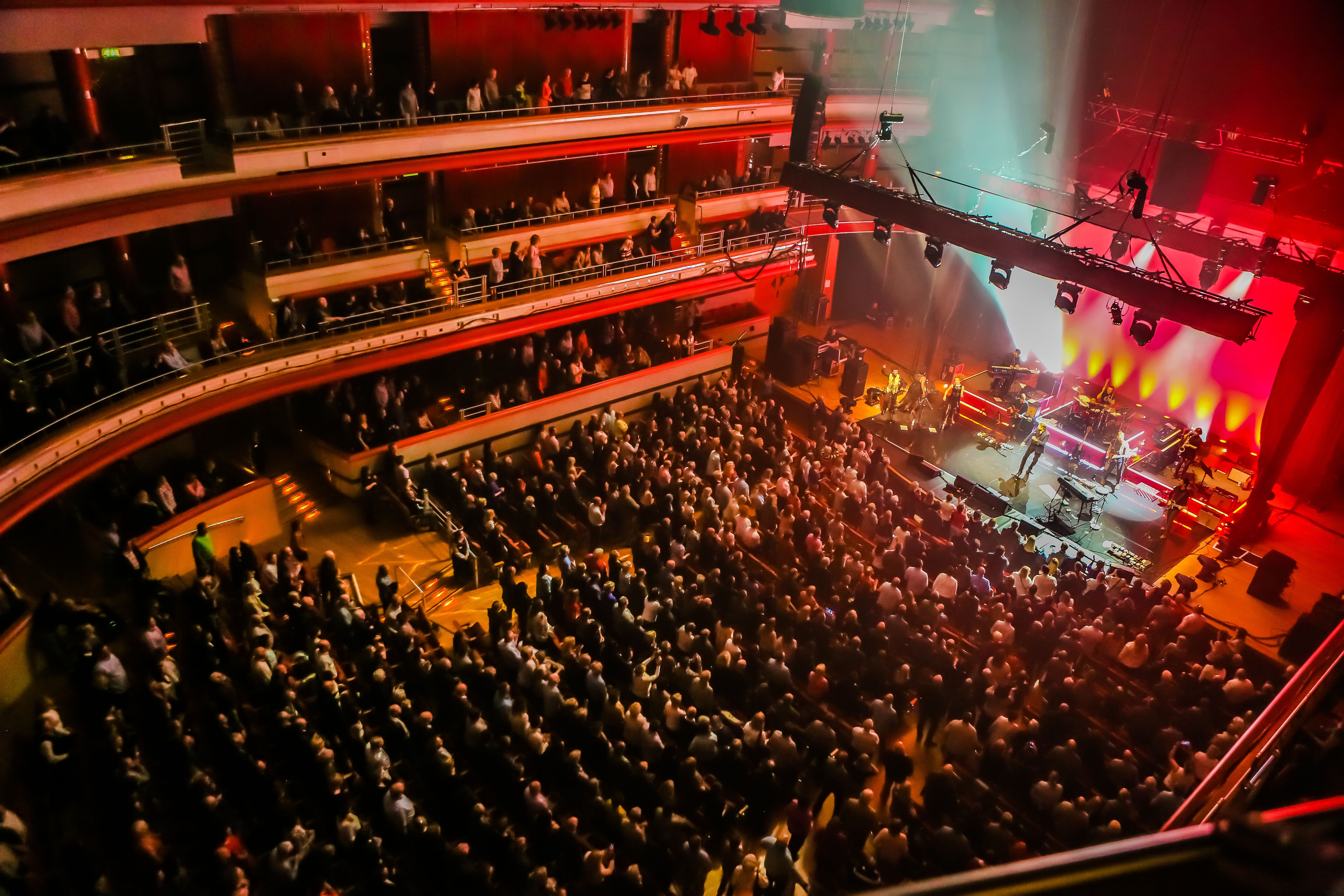 Whether it’s the laughter caused by a comedy show or the awe inspired by a musical performance, the thrill of live entertainment is an inescapable part of contemporary culture.

However, while it is a stress-free recreational activity for most, a great deal of pressure is placed on event organisers to make sure everything from the lighting, sound and seating is handled effectively. In fact, venues are now required to comply with a number of electrical regulations that many electrical engineers do not realise. In light of this, the technical team at the renowned Symphony Hall, Birmingham turned to events power specialistide Systems to shine a light on the electrical challenges and regulations of live entertainment.

The rise of live entertainment

According to UK Music’s Wish You Were Here 2016 report, there were 10.4m music tourists — people who had travelled internationally to attend a concert — in 2015, which is almost half of the year’s total live-music audience of 27.7m.

Understandably, this level of public interest boasts significant financial benefits. Music tourists alone generated a reported £3.7bn in 2015, while if we were to take the average festival ticket price — slightly more than £200 —and estimate a total based on the reported 3.7m festival attendees, it would come to roughly £740mn.In addition to this, Billboard estimated that live comedy generates $300mn (£229.3mn) in revenue every year.

With substantial figures such as this, it is vital that performances go smoothly from an organisational and technical perspective. While this has always been an important aspect of a live show, technical resources have become increasingly valued in recent years. The development of recreational electronics and other technologies has meant that many performers want to take advantage of them in their shows. In fact, rap artist Kanye Westonce infamously postponed a number of tour dates as his electrical equipment was damaged and needed to be reengineered.

It is equally important that in-house electrical infrastructure is able to deliver high quality and consistent sound and lighting to events. Compliance with electrical regulation ensures that equipment will reliably work and not fail mid-performance, something that not only harms a venue’s reputation but can also lead to refunds — as rock band Oasis found out after a technical failure at Heaton Park in 2009).

To this end, when Simon Creed, Head of Technical Services at Performances Birmingham Ltd. joined the registered charity in January 2015, he set about improving the electrical infrastructure at the organisation’s venues, notablythe Symphony Hall, Birmingham.

There are two main regulations that govern the live entertainment industry: BS7671, which is better known as the IET Wiring Regulations, and BS7909, the standard for temporary and permanent power systems at events. Unfortunately, many engineers are uncertain as to whether their systems are subject to both.

“When I began working with the Symphony Hall, there was a need to improve staff training surrounding BS7909as well as BS7671,” explained Simon Creed. “This regulation applies to all devices of a ‘plug and play’ nature, which means that the distribution equipment is pre-assembled and can be set up without the use of tools. The majority of venues use this style of system and so must comply with BS7909.

“To futureproof ourselves against any further regulatory concerns, we wanted to make the fixed distribution panels more user-friendly, reliable and safe. As the venue often hosts big-name music and comedy acts, which utilise both the lighting and sound panels, a panel failure could have a serious knock-on effect to the production or even result in a show cancellation. Both of these would harm the venue’s reputation.”

In order to deliver the project, the technical team requested a bespoke system from temporary and fixed power specialist ide Systems. The new equipment was required to not only fit the space occupied by the previousdistribution panels, but also provide long-term compliance. This could only be achieved with a site visit to inspect the current set up, as well as deliver expert adviceon what protection was necessary for optimum safety and compliance.

ide Systems had already established its electrical knowledge in the area through work with Birmingham’s NEC arena, with one of the venue’s technical managers recommending the company to the Symphony Hall. In addition to the bespoke service, the company also offers a rental and online service so that businesses can either loan or purchasestock event power distribution equipment.

“Our project brief for the Symphony Hall, Birmingham was to provide two bespoke 250amp moulded case circuit breaker(MCCB) distribution boards that comply with the latest industry standards. One being the lightingdistribution panel for the stage right and the other a sound distribution panel for the stage left,” explained Mark Winter, project engineer at ide Systems. “While we ensure that all of our products are engineered to meet the relevant electrical and wiring regulations, certain applications call for a bespoke solution in order to deliver better results and power distribution than the existing infrastructure.

“From our initial site survey, the ide team wereable to identify a number of aspects where there was room for improvement. For example, one of the most common electrical problems in the events industry is that of improper isolation and protection. This is especially important, where it is essential that a failure in the circuit does not cause a system-wide loss of power.

“In order to tackle this, we designed the panels withmechanically interlocked thermal/magnetic moulded case circuit breaker protection at the incoming supply, as well as individually RCBO protected outgoing panel mount sockets. This significantly limits the impact of any connected device failures, ensuring that the rest of the system continues to operate smoothly without fault. We also provided a multifunction meter on each incomer, which communicates information to building management systems for monitoring.”

Aside from the electrical considerations of temporary and fixed power supplies, the footprint of the equipment itself is important. This is a low priority factor in most industrial applications, but it becomes highly desirable in live entertainment environments.

“The existing panels had been adapted over the years to incorporate a number of additional features such as power-lock into the system,” continued Creed. “However, these adaptations had meant that there were many trailing cables on both the sound and lighting panels, which posed health and safety risks as well as causing operational inconveniences. We were keen to avoid excessive cabling in the new products.”

ide Systems took this into consideration during the design stages and made sure that the end result was more compact, allowing it to easily fit into the existing space while offering more ergonomic value and had no trailing cables.

As the Symphony Hall, Birmingham regularly hosts big-name events and productions, it was important that the transition from the existing panels to the new system was quick and seamless. Shortly after the site survey was conducted, an initial design and quotation was provided by ide.

“Events power systems are often required to adhere tovery strict and tight deadlines,” continued Winter. “As such, ide Systems ensures that bespoke designs are conceptualised and manufactured efficiently and in a short timeframe without any additional or hidden express costs. The aim is to deliver bespoke products at a similar rate to the stock options of ide Rental and ide Online.”

To increase the speed of product delivery, ide arranged for engineers to install the panels on behalf of the Symphony Hall. This meant that installation was completed in a timely manner and without any integration problems.

“ide offered a very good service and ensured that no request was too much trouble,” Creed continued. “Prior to the installation arrangements, I was given the opportunity to visit ide Systems’ headquarters to inspect the panels and ask for any changes if necessary. In addition to this, the project was competitively priced and was carried out well within our budget.”

There is likely to be further work between the two companies in the future. Electrical regulations are revised frequently, usually every few years, so there will undoubtedly be a need for assessment eventually. However, the current equipment allows the Symphony Hall to safely comply with the next few iterations of standards.

As live entertainment becomes more important in modern culture, so too will the need for reliable event power systems that power the spectacular shows that audiences pay to see. It is through collaboration with knowledgeable specialists such as ide Systems that in-house engineers can successfully ensure equipment outperforms the standards.