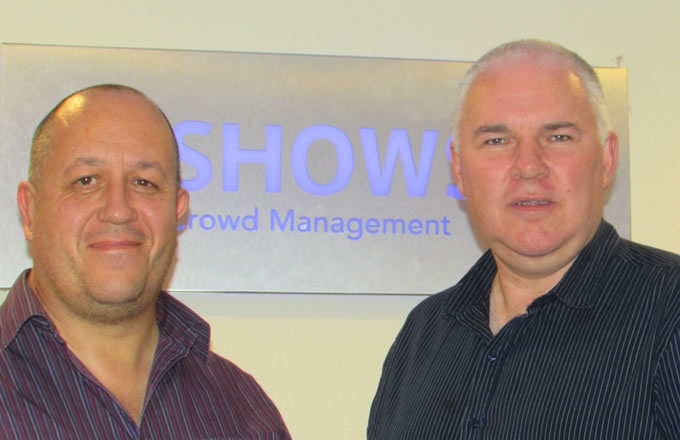 SHOWSEC are gearing themselves up for further expansion in the South of England by appointing two new Regional Managers in a major restructure of the business.

The crowd management and event security specialists have divided their Southern region up into two distinct areas – South East and South West – as they look to maximise the potential for more growth following significant developments in that region in recent years.

As part of that restructure, Paul Legge has been appointed Regional Manager for the South East while Simon Miller takes up the same position in the South West.

While Legge makes the step up from Area Manager, having been a prominent figure in the development of the Company’s London operation for some considerable time, Miller joins Showsec from AP Security.

“This is an exciting development which reflects the growth of the business across the Southern region and the potential to achieve more in the future,” said Director Simon Battersby, whose responsibilities involve overseeing operations in that part of the country.

“When we set about the process of replacing Steve Reynolds as Regional Manager, it made logical business sense to divide the South up into two better proportioned regions.

“It has been the growth of our Southern region and, in particular, the increased level of business in and around London, which makes this the best way forwards.

He added: “This will enable Paul and Simon to focus on providing greater support for Area Managers reporting to them, while also providing better support for planning and putting greater emphasis on the drive to maximise opportunities to achieve further expansion.”

After spending much of his time with Showsec as an Area Manager in London, Legge is relishing the opportunity to make the step-up to a Regional Manager role.

“I’ve been with the Company for almost 10 years now and seen some significant developments in terms of the growth of our operation, both in and around London, so I am excited about the challenge of taking it forwards in this new role,” he said.

“In order to build upon that success, it is important that we continue to deliver high standards of service and manage the expectations of our growing number of clients, but I am confident that we have the team to achieve that objective.”