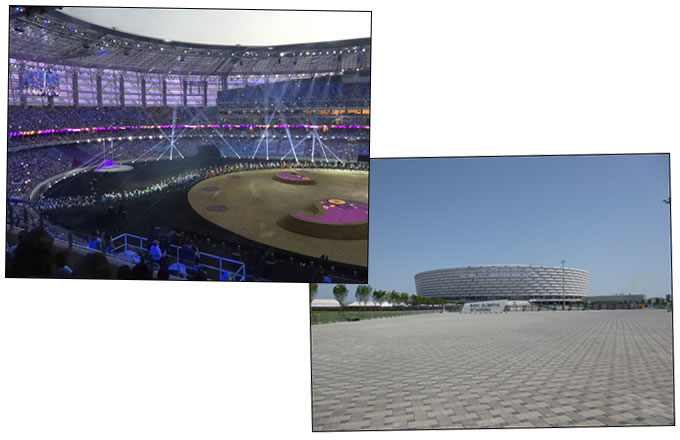 Derbyshire-based Harrier UK and Somerset-based RDHS Management Consultants were rewarded for the development, management and delivery of the Games’ health and safety programme, even though they were commissioned late in the planning process.

Managing Director of RDHS, Joe Ryan explained: “The 2015 European Games was a prestigious and complex project and as soon as we were approached we were keen to get involved, despite the timescales for such a sizeable project being incredibly limited – we were approached just six months prior to the Games and, as you can imagine, this presented us with a number of challenges.

“Working with one of our regular business partners, Harrier UK, we were responsible for overseeing health and safety at the 68,000 capacity Baku Olympic Stadium and in addition to the 6,000 or so athletes from as far afield as Russia and Israel taking part in the ceremonies, the athletic events also saw regular crowds in excess of 25,000 attending throughout the 16-day duration of the games.”

The European Games was the first project that two firms had collaborated successfully on, and as Managing Director of Harrier UK, Andy Smith notes, it was complicated:

“We were working in a country which is, in many ways, still developing its health and safety standards which meant we found in many areas there was no overarching health and safety legislation in place. To combat this we introduced European standards and employed Health and Safety Executive (HSE) best practice to put new processes in place and since the stadium was built particularly for the games, we also needed to develop many stadium-specific policies and procedures from scratch too.

“Our areas of responsibility stretched from crowd safety and food and water hygiene to fire safety and the monitoring of weather conditions - Baku often has very high winds to contend with so temporary structures and banners were a concern, and it can also be extremely hot, requiring adequate protection and water for the games workforce.”

Although primarily using staff from the UK, Harrier UK and RDHS also hand-picked, with the help of the US company, Broadstone, sub-contracted staff and a further four Azeri local health and safety advisers.

Harrier UK’s Andy Smith concludes: ”We are thrilled to have had our hard work and excellence recognised by the British Safety Council, in our industry, that’s an exceptional accolade. We also believe that, thanks to the hard work of our team, we have left a health and safety legacy which will benefit Azerbaijan in the long-term.”

The award will be presented at a gala ceremony in London this May. Speaking after announcing the winners, British Safety Council Chairman, Mike Robinson, said: “All of the winning organisations are examples of dedication and hard work to ensure the risk of injury and ill health is prevented.”