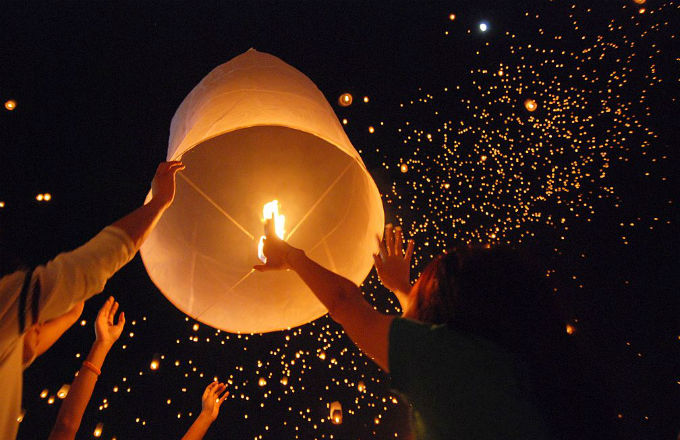 A four-day sky lantern festival Shine Up Fest scheduled for the Kent Showground near Maidstone has been cancelled after 2000 south-east residents opposed it in an online petition.

The  lantern festival, planned for September, would have seen hundreds of biodegradable Chinese lanterns released into the night sky. But the celebration, with tickets costing up to £60, attracted criticism from people living nearby who we.re worried about the risk of fires and harm to livestock.

Among them was Kathryn Tennant. She said: "I live in Detling village with my two horses and numerous livestock. I am horrified that this event will be allowed, not only because of a lack of consideration to health and safety but also due to the extreme levels of dangerous litter left around." Donna Shead, from Maidstone said: "I live on outskirts of Maidstone and have small holding including sheep and 8 horses. I have hay barns and have personal experience how devastating a single spark of fire can be to ignite hay and bedding."

Susan Tanner, chief executive of the National Outdoor Events Association (NOEA), who has been working to tackle the use of sky lanterns at events across the country, told FG Insight it was time event organisers took control and banned lanterns on a nationwide scale. "Sky lanterns are pretty, but they are also extremely dangerous. In essence, every time one is released it is the equivalent of lighting a ball of flame and leaving it to the wind in terms of where it lands. As an association we are trying to put an end to this irresponsible activity and, by supporting the Farmers Guardian Say No to Sky Lanterns petition, we can help persuade some event organisers not only that it is dangerous, but many people just do not want them.”

Shine Up Fest event manager Alan Brown said a team of ‘lantern chasers’ was set to litter pick all of the lanterns to minimize any risk to livestock.  He said the event adhered to the Defra industry code of practice after Farming Minister George Eustice previously ruled out a complete ban on sky lanterns, saying the impact on livestock and the environment was ‘minor’.

Around 200,000 lanterns are sold each year in their UK. Their usage is opposed by the RSPCA and the CLA, an organisation representing landowners and farmers.

However, research for the Department for Environment, Food and Rural Affairs (DEFRA) suggests the risk to livestock and horses by lanterns is low although they could pose a significant fire risk to agricultural crops, buildings and moorland.

A second event is planned for Potters Bar this September.