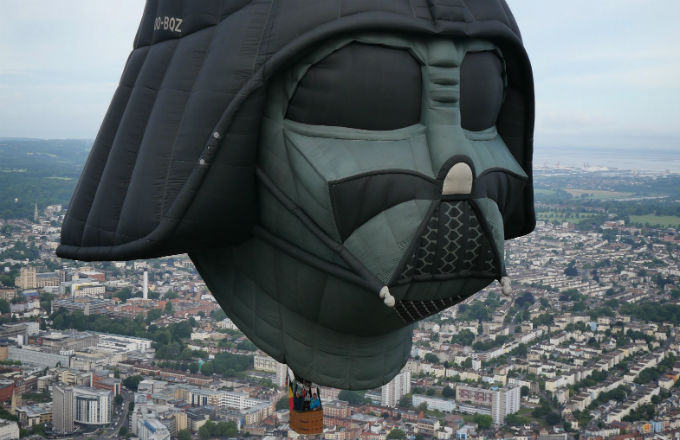 While difficult weather conditions cancelled events up and down the country last weekend, REM pre-empted the incoming bad weather with a bold and decisive decision-making process to bring forward the opening of the iconic event by seven hours.

For the first time in the event’s 41 history the event opened at 5am on Thursday 8 August, adding a hot air balloon mass ascent to the four day schedule and make the most of a fine weather window before torrential rain and high winds arrived at Ashton Court Estate, Bristol.

At 06:40 on Thursday morning, 58 hot air balloons took to the skies over Bristol witnessed by thousands of visitors on the event site and millions more through national and international media coverage.

The world-famous mass ascent celebrated the event’s ‘Icons of Bristol’ theme by marking the first flight over the city of a special shaped hot air balloon in the shape of Darth Vader’s head. The balloon was built in Bristol in 2007 by Cameron Balloons but had never flown in the city, despite appearing at balloon meets around the world. The balloon is also symbolic to the city, as Darth Vader actor, David Prowse was born in Bristol.

Ben Hardy, managing director, REM explaine: “We had been onsite for 10 days loading in infrastructure but as the event got closer the weather forecast wasn’t showing much sign of improvement. With the forecast so changeable it was unclear whether we would gain conditions suitable for ballooning. Less than 48 hours before the event was due to open, it became clear that there would be a weather window for a mass ascent on the morning of Thursday 8 August, seven hours before the opening of the Fiesta.

“One of REM’s key objectives is a place-maker goal – to help put Bristol on the international map. With the special feature of the Darth Vader balloon, we decided it was a case of Carpe Diem – seize the opportunity to make the most of this opportunity.

“We called a management meeting at 10am on Wednesday morning, when we were in the middle of loading in 363 traders and framed a contingency plan to safely open the event early.

“We then spent the next four hours dealing with key stakeholders, who were all very supportive. Bristol City Council and North Somerset Council were key as the landowners and to gain site permissions to open the site to the public ahead of time. Then it was a case of checking with partners around crowd-safety and traffic management including Avon & Somerset Constabulary, Highways England, security partners, Showsec, local authority traffic teams, festival medical teams and St John’s Ambulance. By 3pm we were in place and ready to go, a testament to all the planned and processes we have in place – and a great team of people with a lot of trust, to pull it off.

“Our comms partners, Plaster were key to our initiative being effective. They were superb in getting the messaging right and out to everyone to make sure the media were on side and on site and the public knew what was happening.

“We drew in a higher audience for Thursday’s mass ascent than ever before, images of the mass ascent have been seen around the world and our ‘Icons of Bristol’ theme was truly celebrated as the Darth Vader hot air balloon was pictured over the Clifton Suspension Bridge, pulling two icons of the city together. The picture has already been used by media across the world and we even had Luke Skywalker actor Mark Hammill retweeting our video of Darth over the streets of Bristol”

The decision to bring the schedule forward looked even better as the REM had to activate bad weather contingency plans as the site was closed for the majority of Saturday through high winds and rain, with limited activity on Sunday.