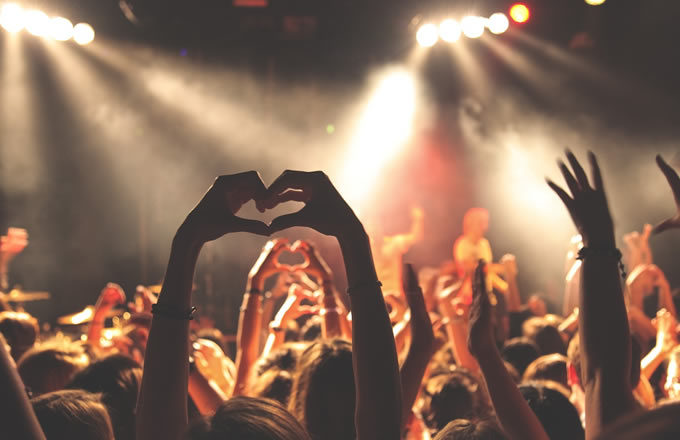 Fifth of Brits choose festivals over holidays
Share This

A fifth (20 per cent) of Brits are set to choose a festival over a holiday this year, with 32 per cent now seeing a live entertainment event as their main trip for the summer, new research by Barclaycard has found.

The rising cost of holidays (29 per cent), hotter summers in the UK (14 per cent) and uncertainties around Brexit (12 per cent), are persuading Brits to attend more live music events this year. Nearly a fifth (19 per cent) feel their summer would be incomplete without the atmosphere of a festival field to soak up, with 22 per cent suggesting they lean towards these types of events because they have ‘everything they want’ in one place.

Furthermore, it’s not just what’s on site that’s swaying us; 20 per cent feel festivals are a rite of passage, with 44 per cent believing that everyone should attend one at least once in their life. In fact, of those surveyed who are parents, over a third (34 per cent) would like their children to attend a festival to enhance their social skills and build confidence (31 per cent).

A quarter (25 per cent) will attend a festival for the first time ever this year but it’s more than just catchy tunes that cause us to favour festivals. Many also feel they are the perfect environment to broaden the mind (24 per cent) and almost a fifth (18 per cent) find the immersive nature events offer more opportunities for discovery than other cultural activities. Trying new foods (27 per cent), activities such as yoga or comedy (27 per cent) and meeting new people (25 per cent) are some of the top reasons Brits will be flocking to fields this summer.

One in four (25 per cent) also favour festivals for making monumental memories with their friends, as one in ten admit to experiencing FOMO (fear of missing out) if their friends attend an event without them.

Despite so many of Brits attending festivals and priming themselves for discovery, many still feel they could benefit from advice and tips to give them a helping hand. More than a fifth (22 per cent) worry they will run out of money, with 16 per cent admitting they are not sure how to budget effectively. Whether a first timer or seasoned festival-goer the average spend stands at £549.76 per person, with the highest spend on travel (£65) clothes (£42) and tents (£43).

When it comes to mastering the art of live entertainment events, 22 per cent would welcome advice from those that have attended before. Helpful stewards (34 per cent), phone charging points (33 per cent) and complimentary waterproofs (23 per cent) were also identified as ways to enhance the festival environment.

Further preparation includes making a schedule of acts to see (33 per cent), studying site maps (27 per cent) and creating bespoke playlists (11 per cent). Many will splurge on new outfits (38 per cent) while one in ten (10 per cent) will try out a new hairstyle or even take singing or dancing lessons to prepare for the event.

Daniel Mathieson, Head of Sponsorship at Barclaycard, said: “It’s fascinating to see how live entertainment events have evolved over the past few years. Festivals are no longer just about the music, but about finding opportunities to discover new ways to have fun and make memories, whether that’s taking a yoga class, trying out a new cuisine or seeing a comedian.

“Festivals continue to support a wide-range of interests and for many, have become a cultural rite of passage. With many events now billed as entertainment hubs offering so much to do and see, it’s not surprising Brits are considering putting off a trip abroad in favour of some festival fun!”

Edith Bowman, Broadcaster, said: “I’ve spent half my life going to festivals and I am thrilled to see that their wider value in society is starting to be truly recognised. From self-confidence and open-mindedness, to new tastes and unforgettable live music – there is so much on offer. I can’t think of a better way to spend my summer than with those who have an appreciation and love for the same thing that I do.”

To help people discover even more while on site, the Barclaycard ‘Sensorium’ is an immersive structure that will take festival-goers at Download, Latitude and Barclaycard presents British Summer Time on a multisensory journey designed to open the mind and prime music fans for discovery.

The top 10 reasons Brits are likely to attend a festival this summer: