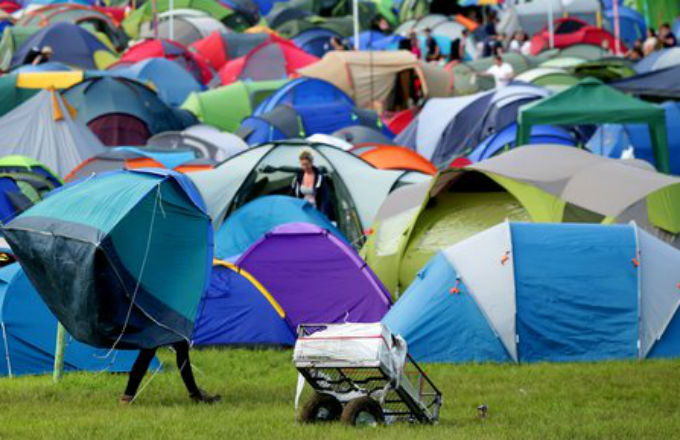 AIF Launch "No Single Use Tent" Campaign
Share This

Organisers of more than 60 independent festivals across the UK have issued a call to retailers such as Argos and Tesco to stop marketing and selling ‘festival tents’ as single-use items, which result in almost 900 tonnes of plastic waste every year.

The call comes as part of a new initiative from the Association of Independent Festivals (AIF), which has also launched a consumer-facing campaign urging festival-goers to ‘Take Your Tent Home’ and ‘Say No To Single Use’. AIF members include some of the biggest and most well-known independent festivals in the country such as Shambala, Boomtown Fair, Boardmasters, Kendal Calling and End Of The Road.

AIF estimates that each year 250,000 tents are left at music festivals across the UK. Most aren’t collected by charities and can’t be recycled, meaning the vast majority end up in landfill. The average tent weighs 3.5kg and is mostly made of plastic - the equivalent of 8,750 straws or 250 pint cups.

Major retailers have a history of selling cheap tents marketed specifically for festival-use.

Research from environmental charity Julie’s Bicycle says that the carbon impact of manufacturing a 3.5 kg tent that ends up in landfill is 25 kg CO2e.

AIF’s ten-year report, published in 2018, revealed that 9.7% of people attending its member events had ditched a tent during that year’s festival season, equating to an estimated 875 tonnes of plastic waste - the equivalent of 70 Routemaster buses or eight blue whales.

What's more, the "ditch" rate is higher for some other festivals, averaging 1 in 5 according to research with Love Your Tent, Bucks New Uni and AGF, in which case the actual plastic impact is even greater.

The AIF campaign includes an animated educational video that will be displayed across social media for all participating festivals, as well as assets being displayed on screens and at entrances to festival campsites throughout the 2019 season. The Take Your Tent Home campaign follows the Drastic On Plastic campaign, launched by AIF last year in partnership with RAW Foundation, which empowered 65 of the trade body’s member festivals commit to eliminating all single-use plastic at their events by 2021.

In 2018, the first year of the Drastic On Plastic pledge, festivals have reported some significant changes at their events: 93% of signatories ditched plastic straws, 40% banned the sale of drinks in single-use plastic on-site, 40% replaced single-use bar cups with reusable cups, 67% sold branded reusable drinks bottles, and 87% promoted the use of reusable bottles.

AIF CEO Paul Reed said: “We call upon major retailers to stop marketing and selling tents and other camping items as essentially single-use, and profiting from disposable culture. AIF launches this campaign to raise awareness and highlight abandoned tents as part of the single-use plastics problem. The message here is not to buy a more expensive tent - with a single tent carrying the same amount of plastic as more than 8,700 plastic straws, festival audiences can take positive action and reduce their carbon footprint simply by taking their tent home and reusing it, ensuring that it doesn’t become a single-use item this summer.”

Co-Founder and Director of Shambala festival Chris Johnson said: “We're finally waking up to the climate crisis en masse. The stuff we use is part of the problem - everything has an impact, usually hidden from the user. As festivals, we can work with audiences to inspire better decisions, reduce single use and waste, and minimise ecological damage at this critical moment in history.”