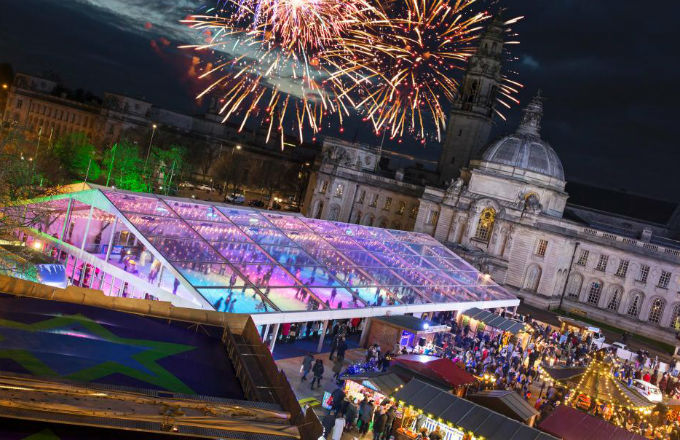 Cardiff-based events specialist 11th Hour will bring its 11th year in business to a close by supplying a huge New Year’s Eve fireworks spectacular to its home city.

Sayers Amusements, with whom 11th Hour work to deliver Cardiff’s Winter Wonderland, commissioned the public display which will be fired from Cooper’s Field in Bute Park on the stroke of midnight. Lasting 6 minutes, the all-aerial show will comprise professional Category 1.3 explosives with calibres ranging from 75 - 200mm, culminating with a loud, rapid-fire finale. Fireworks are a growing area of 11th Hour’s portfolio, the company having already delivered a number of high profile displays, not least of which was at this year’s Pride Cymru Big Weekend in Cardiff. The New Year’s Eve show will be its biggest  to date but as 11th Hour Director and British Pyrotechnists Association qualified and registered firer, John Davies explains, the in-house team is well equipped for the challenge:

“We’re using fireworks that are not available to the general public. They arrive with us incomplete and we finish their construction in our licensed store and at the site, inserting suitable fuses, e-matches and inter-fusing materials to help sequence the show. Everything will then be set up in daylight, racks laid out per the firing plan and shells loaded before being connected to the control system which is tested and verified before the display. Minutes before midnight, the system will be armed and when the clock strikes, it will take over and - ‘fire in the hole’ - the sky will explode with colour and a million points of sparkling light!”

The responsibility for more than 400 explosive shells is taken very seriously. Safety is central to every aspect of planning and executing such an event and 11th Hour’s training is thorough, with all operators certified to the highest standards. John Davies continues:

“We liaise closely with the Fire Service, Police Service, Local Authority and the Civil Aviation Authority and take into account every possible variable that might come in to play. These range from prevailing winds and local weather events that determine launch angles, to calculating the fallout zones for the ‘confetti’ that returns to earth. For example, our largest 200mm shells demand a 200m exclusion area and so we site them accordingly. On New Year’s Eve, the park will be locked with no members of the public present at the launch site and in the event of possible misfires, we are able to contain them using tried and tested, industry-standard practices.  Ultimately the audience experiences an amazing wow-factor at a safe distance, delivered by experts in a carefully controlled way.”

11th Hour’s reputation as a one-stop shop for event services is burgeoning. The company’s flagship ice rink is a major feature of Cardiff’s winter landscape and its delivery of power and so much more to high profile sporting events such as The Six Nations and this year’s UEFA Champions League final, are indicators of its strong position. 11th Hour’s track record for delivering a huge range of products and services to local, national and international events has been proved effective time and again and its client list grows month by month. Next year will see its teams busy again in the thick of the action, supplying services to a long list of prestigious entertainment, corporate and sports events throughout the UK.

Like its New Year’s Eve fireworks, 11th Hour will continue on its upward trajectory in 2018 but unlike those short lived flashes across the sky, this Cardiff success story will keep burning brighter and flying higher.