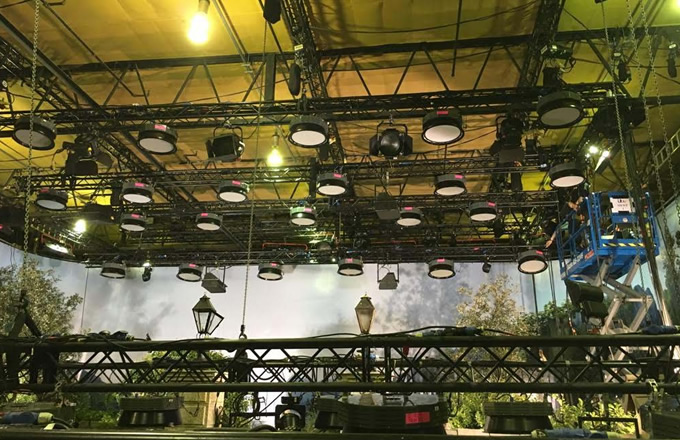 Blackout added ITV’s The Sound of Music Live! to their list of television production projects after supplying truss and rigging to the live musical show, aired 20th December 2015.

Chris Brain, Blackout’s project director oversaw a pre-rig before the set at London’s Three Mills Studios was built, then worked closely with HG Event Production’s Harry Guthrie and the lighting team installing the TV lighting over a three week period.

The Blackout team were called upon to install 90 CM Lodestar motors, 600 metres of truss and 150 metres of pipe, and black wool serge drapes to mask the dressing room.

Chris explained “The show was the first of its type, being shot live from numerous stages in the studio. This was such a special project to work on and we are proud to have been contracted to provide the truss, rigging and drapes on such a world-renowned live musical production.”

Harry Guthrie, working on behalf of ITV as technical production manager to oversee the complete technical delivery of the project commented “The Sound of Music Live! was a UK television first in terms of broadcasting a musical drama completely live. Given the parameters of a tight build and strike schedule, what we needed was a rig and personnel that would have the flexibility to adapt and accommodate changing specifications as rehearsals and design developed. Blackout with their experience of large scale one-off events and television production made them the perfect fit for this project. Lead by Chris Brain, the whole Blackout team were brilliant - their consideration and flexibility to the project as a whole made them a valuable asset to the overall production and I look forward to working with them again very soon.”

The two and a half hour ITV production, watched by 4.5 million, featured Kara Tointon as Maria, Julian Ovenden as Captain Georg von Trapp and Alexander Armstrong as Max Detweiler.