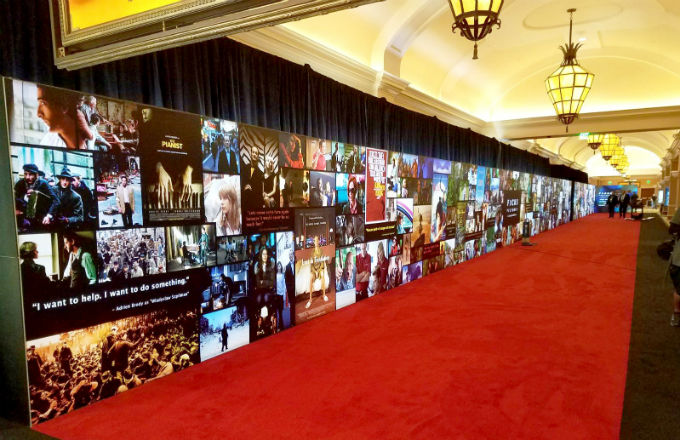 The company was commissioned to create two 170' and 96' illuminated walls to help Focus Features celebrate their 15 year anniversary and STX Films to enrapture visitors to CinemaCon 2017.

Using the Tecna Display's T3 modular framework system, Olson created one of its largest displays ever for Focus Features - a 170' long illuminated wall with graphics depicting highlights of their top films. The entire display had to be built as three separate structures due to the location of a fire exit door. The wall segments, all eight foot high, were 101, 57 and 13 feet long and all were illuminated using the brilliant white light of the revolutionary Wandlite LED tube.

Rick Olson, President of Olson Visual said: "The display and graphic got a fantastic response from the public; members of Focus Features' team actually said it was so beautiful, they may cry. It was another momentous success for Olson Visual and T3." A key aspect to the display was that the 101' illuminated wall section was cladded in a SINGLE SEG fabric panel - the largest printed graphic Olson have created. All the graphics - printed onto PVC free textile on UVI inkjet printers - were edged with silicon and mounted onto the T3 framework using Tecna Display's 45° Silverlite profile which gives a clean finish to the display.

The entire display took the crew of Olson Visual four hours to build and dress with graphics without the use of tools; unheard of when it comes to other display frameworks, says the company.

Olson also created a T3 modular framework designed step and repeat illuminated wall for STX Films that was 96' in length, 6'-9' in height and 24'' in depth. The structure was lit using a LED lighting system that allowed the event producers to remotely control the intensity of the lights. Lights could be dimmed or even shut off during interviews and trailer previews.

The 96' wall was broken into five separate segments, each staggered to make the step and repeat display. Due to space on the stage and available time, the team at Olson pre-built the five segments and wheeled them in for installation and dressing with graphics.

Rick Olson said: "A crowd of more than 4,000 visitors watched as the T3 structure with the beautifully printed STX logo patterned graphic would light up and go dark instantly when a film trailer was played on the large screen overhead. It was another example of why T3 is the best choice for event structures."