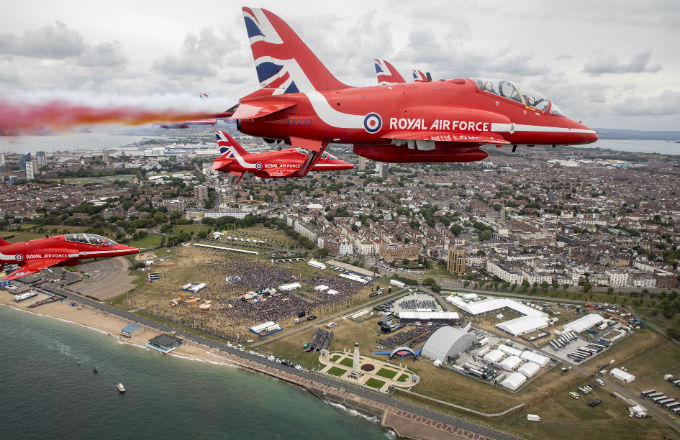 Show of strength on D-Day 75th anniversary
Share This

A National Commemorative Event to mark the 75th anniversary of the D-Day landings saw 3000 invited guests including over 300 veterans, Her Majesty the Queen and sixteen heads of state – including President Trump – descend on Portsmouth’s Southsea Common this month.

The high-profile and high-security event, organised by HPower, the event management specialist, called upon the expertise of Showforce, which provided essential crew for two weeks. From 28th May – 10th June, the event crewing specialist supported the commemorative event – which was broadcast live on the BBC – with technical crew, specialist plant operatives and a crew chief.

Harry Guthrie, tasked with managing the event’s technical production, worked closely with Showforce, who were contracted to assist with vital production elements. Showforce worked with several of HPower’s contractors – including VSS, Delta Live, Christie, DLM, Steel Monkey, Creative Event Solutions and Blackout – to create the bespoke stage and set that was designed by the BAFTA Award winning TV and live Event designer Patrick Doherty. At the height of the project there were more than 80 Showforce crew onsite and 10 plant operators. 2,060 man hours were accumulated with crew travelling from all four of Showforce’s UK offices to support.

As well as assisting HPower, Showforce also provided crew to Arena Structures and Arena Seating, which provided the event’s Royal Box and seating as well as other support structures for Accreditation, Catering and Medical. Furthermore, Showforce worked with Trans Sport to deliver the BBC’s on-site television studio, which enabled the BBC’s Huw Edwards to anchor the live broadcast from Southsea Common.

Commenting on Showforce’s assistance to HPower, operations director Chris Martelly said: “Providing crew to such a prestigious and impressive event to honour our veterans for their tremendous efforts at the D Day landings was an incredibly proud moment for everyone at Showforce. The entire team from the back office operations team to the crew onsite stepped up to the challenge and were thrilled to play their part in a wonderful event attended by royalty, world leaders, dignitaries and of course the veterans themselves.”

Harry Guthrie, technical director for the project, said: “Technically this was a complex build with very little lead and build time to deliver. Showforce has always shown the flexibility, aptitude and skill to deliver a variety of specialist and general crew for the big occasions. It was a pleasure to have them and some of their more experienced crews working for us on this event. Individually and as a company they should be proud of the part they played in successfully delivering this important commemorative event on an International scale."