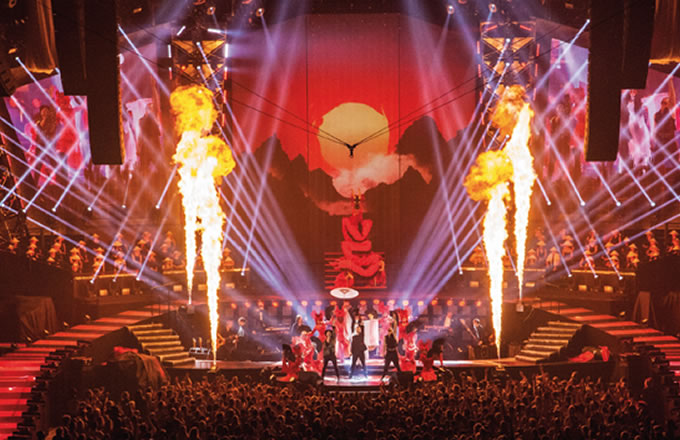 Pyrotechnics and flames, cascading waterfalls and confetti storms, Special Effects can turn your event into something an audience will never forget. Established in 2009, Quantum Special Effects has quickly become the go-to company when you want to achieve a truly iconic moment.

With offices in the UK and USA, Quantum has a dedicated research, development and engineering team working hard to meet the creative needs of the global music, sports, corporate and experiential world.

“We have a range of off-the-shelf effects which can be tailored to meet the needs of any event, large or small,” says Quantum’s MD Shaun Barnett. “But where we really come into our own is developing bespoke SFX solutions.” The Rugby World Cup Opening Ceremony Watched by over 450 million people worldwide, the Rugby World Cup Opening Ceremony was the highlight of the 2015 sporting season. Quantum played a starring role, developing a new liquid flame system for Creative Director Kim Gavin, Production Director Steve Nolan and Show Designer Misty Buckley.

“The biggest challenge was the time we had to set up and de-rig,” says Barnett. “The whole set had to be off the pitch in just 10 minutes, so the rugby match could start. Being broadcast live, there was no room for error, we had to ensure our kit didn’t impede the overall de-rig time. “We needed a flame system which would meet this demand, yet still create the visual impact required for the live and broadcast audiences.”

Quantum’s engineering team produced a wirelessly controlled, self contained, flame system built into a custom flight case. This was mounted on pneumatic wheels, which allowed efficient maneuverability without damage to the pitch. Controlled via the reliable wireless Galaxis firing system, the new system allowed the flames to be deployed anywhere in the stadium and wheeled on and off in seconds.

Eight units were situated around the giant rugby ball centerpiece, each firing a spectacular 30ft flame into the air. “It worked perfectly and we’ve already had interest from other sports events and venues,” says Barnett. “We essentially redesigned our current SpitfireTM flames to be self-contained units, but utilised Galaxis wireless control software and integrated it into our system.

“We have 12 new Arena SpitfireTM flames but we are manufacturing more and aim to have 100 in stock over the next 12 months. We are also developing Stadium SpitfireTM flames, which are even larger and produce at least a 60 foot high and much wider flame.” Telling the story of the birth of rugby, the Opening Ceremony saw Quantum put a vast array of its products into action including 16 red crackle comets released in tandem with the new moveable liquid flames. Pyro was fired alongside two giant fireballs (known as Harvey Wallbangers) as part of the opening sequence, an effect exclusive to Quantum.

One of the most exciting additions to Quantum’s product portfolio is its new Multi-Sensory FX. The immersive effect allows audiences to connect with an event through taste, synthetically replicating any flavour, from soft drinks to food combinations. The eff ect is then dispersed via a range of mechanics, visual and non-visual, including smokefi lled bubbles, mist, rain and snow. “Taste is one of the most powerful human senses and until now it has been very difficult to incorporate into an event,” explains Barnett. “From strawberries and cream to gin and tonic, anything is possible. It opens up a world of opportunities for experiential agencies, product launches, festivals and concerts.” The flavours are created using a scientifi c process that replicates the flavour exactly, distilling it into a concentrated liquid that is food-safe, non-allergenic, non-staining, suitable for vegetarians, safe for diabetics and conforms to Halal and Kosher regulations. The liquid is then released through diff erent methods, including the Atom system, which produces a fine-atomized mist.

“We developed the Atom system to give instant delivery of flavour over a large area, allowing a huge number of people to taste the same flavouring at exactly the same time,” Barnett says. The product has been used at events including a New Year’s Eve celebration with Vodafone, where the liquid mist was dispersed over a crowd of 50,000 along Victoria Embankment in London.

The touring market provides the perfect opportunity for Quantum to flex its creative muscles. On Take That’s 2015 tour, the team introduced the new XLSG Smokestorm machine. It has the ability to kick out enough smoke to fi ll six tennis courts in less than 60 seconds. Quantum also adapted its Super Shooters to shoot 5kg of confetti into the air at once. The brief was to make it look as though a handful of paint had been thrown. A rain system was included in the creative brief, although the production team was dubious about touring a rain system due to bad previous experience. Quantum designed and manufactured a rain system that was wirelessly controlled, quick and effi cient to install and de-rig with no leaks, and produced an instant rain effect.

Quantum has also been on tour with Muse, Katy Perry, Adam Lambert and Queen. The imminent Mumford & Son’s tour is being designed at time of press. “We can’t name names just yet,” says Barnett. “But we’re also working on a very exciting new flame product for a major act”. Sustainability with Arcadia Spectacular Arcadia’s giant arachnid stage has hosted some of the world’s best-known DJs, from Fat Boy Slim and Annie Mac to Skrillex and Groove Armada. The company’s whole ethos is sustainability, with 95 per cent of the 50 tonne, 15m high, 20m wide spider being made from recycled military scrap. Technical Director Bertie Cole and Creative Director Pip Rush Jansen contacted Quantum to see if there was a way to make their flame system fi t more with their sustainable ethos.

Quantum’s engineers designed a bio fuel flame system. Nine of the flames are located across the top of the spider, firing 30ft into the air and kicking off some major heat. “Every part of the system is bespoke,” says Quantum’s engineer Mike Badley. “The basis was our Spitfi re product, which is a big liquid flame system. The liquid we usually use is very thin – like water – whereas bio fuel is very thick. We introduced a giant pump system in order to get the pressure right and get it to atomise correctly.” The new product drastically cuts own Arcadia’s carbon footprint, with bio fuel readily available in most countries.

Quantum’s MD Shaun Barnett concludes: “It’s yet another example of what can be achieved. Give us a brief and we’ll find the solution.”