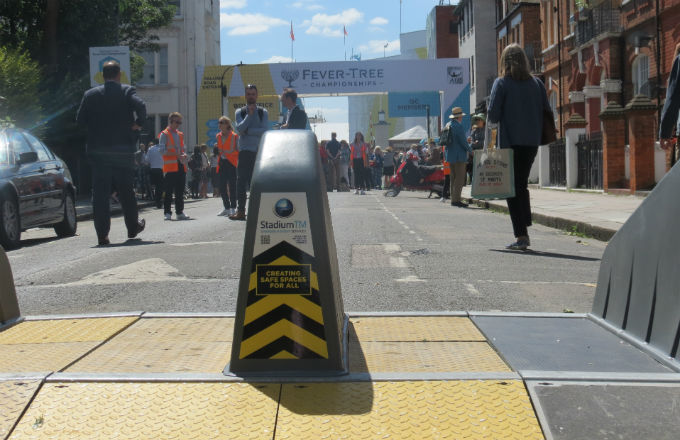 Fans at one of the UK’s largest tennis tournaments were protected against potential vehicle-ramming attacks after mobile temporary security barriers were installed for the very first time.

The Lawn Tennis Association (LTA) had unique industry-leading crowd protection barriers installed at the Fever-Tree Championships at Queen’s Club, in London, as part of security measures at the week-long event.

The innovative ATG Access surface guard barrier system allows pedestrians to pass through safely, is accessible for wheelchair users, pushchairs and cyclists and can be dropped in less than 30 seconds to enable emergency vehicles to pass through the system, with police horses and police motorbikes also able to access through the barriers.

The event marked the longest duration that the temporary barriers have ever been deployed and enabled more than 60,000 attendees to cross over the week.

David McAtamney, Managing Director of StadiumTM, said: “It has been fantastic to work with the LTA and secure spaces in this beautiful city, ensuring that thousands of tennis fans as well as residents in the area were protected from potential vehicle ramming attacks.

“As we have seen, such attacks can take place anytime, anywhere, and we cannot fall naïve to these threats. The barriers are a temporary security measure which not only acts as a deterrent, but can also arrest and stop vehicles.

“While there are other methods available, they are inefficient, costly and hinder pedestrian flow, making it difficult to both enter and exit a site.

“We look to create environments that feel safe and secure to event attendees, and we are very proud to do this.

“The success of this event demonstrates the importance of the perimeter protection industry and the events world coming together, and also shows that the championships are a step ahead in crowd protection security.”

The barriers were well-received by those living in the area, who praised StadiumTM for both keeping residents safe and ensuring disruption was kept to a minimum.

Resident Bill Howell said: “The team worked efficiently with consideration to noise levels, which were kept to a minimum, and the barriers were both assembled and dismantled daily within the timeframes agreed throughout the tournament.

“I was impressed that the disturbance was kept to a minimum after the initial assembly, bearing in mind that many sections of the barriers are heavy duty steel.

“If StadiumTM continues to attend these events with this level of consideration and efficiency, it bodes well for both the residents and Queen’s Club in the future.”