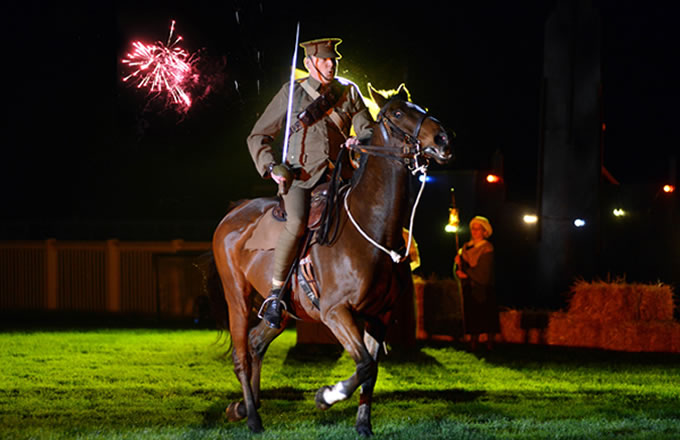 Warhorse, the epic story of Joey, a horse thrust into the horrors of the First World War, has been created in several formats – as a best-selling children’s book, as a blockbuster film and as a hugely successful stage play. Until now it has never been staged as a fireworks display.

Responding to the challenge set by Windsor Racecourse of creating a Bonfire Night display with a First World War theme, the company came up with the idea of adapting Michael Morpurgo’s emotive story.

The company’s managing director Jon Culverhouse said he approached the author’s agent expecting a polite rebuff. ‘Instead we were delighted when he said Michael Morpurgo welcomed any ideas which would bring his story to a wider audience.

‘With that hurdle cleared our next task was to adapt the book into a narrative that could be told in about 30 minutes. Whichever way we looked at it there was no escaping that we would have to have a horse at the centre of the story!

‘This could either be done figuratively using an image of the Warhorse in fireworks or flaming rope, or by using a real live horse. The problem with the latter would be getting it to perform while fireworks were exploding all around.

‘An internet search of stunt horses produced a stables near Windsor specialising in horses experienced in battle re-enactments. There we were introduced to Orlando, a bay who perfectly fitted the author’s description of Joey’s white muzzle and fetlocks.

‘Our script editor Laura Whitley retained the book’s first person singular format and we selected the actor Robert Powell to narrate the story. With the script recorded, our next challenge was to create a soundtrack which complemented rather than overshadowed the story.

‘Avoiding well-known scores that would be too readily associated with other films, our sound editor Andy Hedges pieced together a beautifully atmospheric soundtrack using lesser known works. The result was both sad and poignant on the one hand and joyful and uplifting on the other.

‘With the narration and soundtrack completed we set about designing a theatrical setting which wouldn’t look lost in Windsor’s wide acres. By bringing the sets up close to the audience, we were able to create a realistic skyline of Joey’s home village of Hatherleigh using plywood cut outs.

‘For the sake of accuracy we even went to the trouble of ensuring that the church steeple matched the one in Hathlerleigh! A similar technique was used for the battlefront depicting soldiers, barbed wire and field guns.

‘When a German tank appeared in the story we created one out of painted plywood attached to the side of a moving van!. ‘Our lighting designer, Dominic Yates, used a mixture of follow spots, lightening flashes and floodlights to illuminate the sets and create atmospheric effects in the war zone. Our theatrical director Louise Wallace gathered a small cast of amateur actors to play the roles of villagers while the stunt horse stable provided the rider and uniform who would be Joey’s principal partner.

‘Finally there were the fireworks. These had to be in sympathy with the events in the story. Our designer David Willsher carefully followed the early mood of rural peace and tranquillity using pretty formations of Roman candles. Then, when the action moved to the battle front, the sky was suddenly lit with the thunder of war.

‘Everything had to be timed to perfection and with a horse in the cast of a live performance there was a lot that could go wrong!

‘On a still, dry November evening the whole event came together almost to perfection. Joey the Warhorse walked obediently when required, he cantered when asked, looked suitably lost when finding himself riderless in battle and finally was ridden home to a hero’s welcome.

‘In between, our German tank lumbered into the scene bang on cue and the fireworks produced memorable spectacles, including our ‘horsetail’ effects which tumbled down the sky looking just like a horse’s tail.

‘For me the most memorable sight was the finale, in which we paid tribute to the fallen with a sky full of floating red ‘poppies.’ It looked absolutely stunning and from being spellbound one moment, it was a real thrill to hear the audience of nearly 10,000 burst into spontaneous applause.

‘We couldn’t have asked for a better performance from our motley cast, especially Joey!’

If any organiser is interested in staging ‘Warhorse – the fireworks display’ for their own event please contact Jon Culverhouse at Fantastic Fireworks on 01582 485555 or email This email address is being protected from spambots. You need JavaScript enabled to view it.. Video highlights of the show can be found on youtube under the heading ‘Warhorse the fireworks display’